Looking back at events in your life now you can gain a whole new appreciation and sense of awe of things that you didn’t truly understand back in the day.

We had a split class when I was in the 7th grade, our class was made up of grades 7/8.  I went to a French elementary school in Kitchener Ontario.  We were tasked with a project and presentation. I couldn’t even begin to tell you what my project was on to be honest, nor can I tell you anything about any others – but, ONE stood out and something about it to this day still fascinates me!

Now my memory may be a bit sketchy because that would have been in about 1987, 30 years ago, so I am going to back up my story with some facts.  For her presentation, Genevieve Lambert (who was in grade 8, I was in Grade 7), brought in a guest.  This lady with whitish hair stood there and told of the day she found a crystal skull in Belize while on an expedition with her father.  The crystal skull stood alone, on a desk, in front of her on a black velour type blanket as she explained the day she found it, what meaning it is said to have as well as its powers.   This is another one of those “I wish I could go back in time moments”.  This is the kind of stuff that fascinates me … history, exploration, mysterious artifacts which are believed to possess mystical powers … 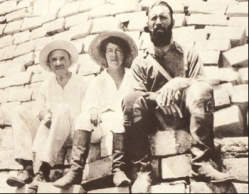 Of all of the crystal skulls, the Mitchell-Hedges skull is probably the most famous. The skull was allegedly discovered in the 1924 (or 1925/1926/1927 her account of dates vary), by Anna, who was the the adopted daughter of a British adventurer and traveler Frederick Mitchell-Hedges. Anna claims that she found the skull beneath the altar of a Mayan temple in Lubaantun, a ruined city in Belize, on her 17th birthday.  The city was rediscovered in 1924 by her father, Frederick,  who is said to have inspired the well known character, Indiana Jones.

The skull is one of 13 such crystal skulls apparently discovered in Mayan and Aztec ruins. The Lubaantun skull, however, is remarkable for the clarity of the crystal and the skill and detail of the carving. Many believe the skulls have special abilities, such as aiding psychic abilities, healing the sick—or even power over death. The skull was rumoured to have supernatural powers and many who had spent time alone with it described a glowing aura and said bizarre filmic images appeared inside it.

Anna inherited the skull from her father upon his death in 1959. She toured with it and 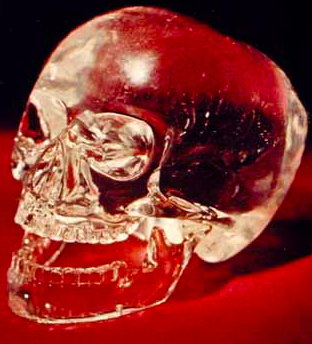 gave many talks/interviews. Now deceased, Anna Mitchell-Hedges had the skull to her death, though it was mostly kept locked away in a bank vault. Anna moved away from her Kitchener home and stayed with friends in the United States until she passed away.

After the presentation, we were given the opportunity to get up close up and touch it – it was so pretty!  It looked anatomically correct, pure, clean, clear – like a  beautiful skull of glass or ice.  In reality the skull is made of solid crystal quartz.  I’m sure Genevieve got an A+ on that project, and the years went on.  I hadn’t thought much of the crystal skull, then in about 2014 I was binging on some National Geographic (Ep: Crystal Skulls) and on came the Mitchell-Hedges skull!  Naturally I watched it and reminisced about my little encounter with it.  “How cool” I thought to myself “I actually got to see it in real life”. 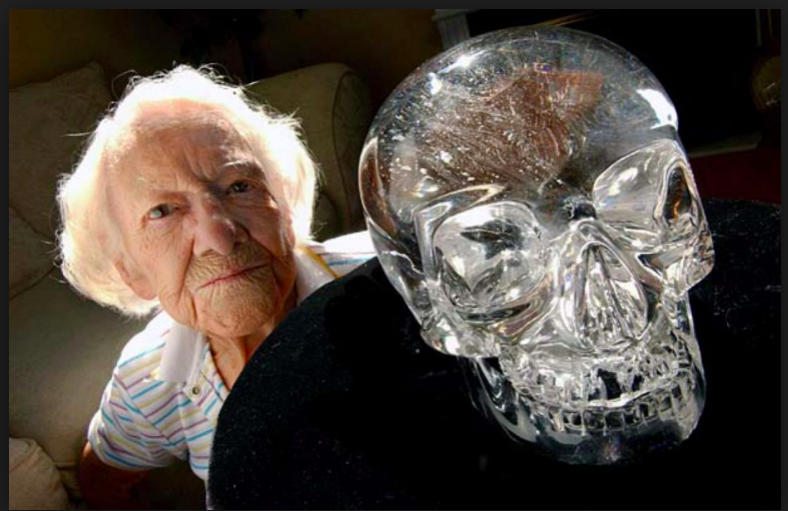 Anna Mitchell-Hedges, pictured in 2005, claims to have found this crystal skull in Belize during her father’s 1924 search for the lost city of Atlantis.  (MATHEW MCCARTHY / KITCHENER-WATERLOO RECORD FILE PHOTO)

Then, just yesterday, I was watching an episode of Portal to the Unknown (S1: Ep 10, Mysteries From the Past), up comes a segment on …. you guessed it, the Mitchell-Hedges crystal skull.

Perhaps because of its popularity, the authenticity of Mitchell-Hedges Crystal Skull is often challenged. There are two sides of the coin.  To crystal skull devotees they are real and hold powers and then there are others who believe that this whole find was just an elaborate hoax.  People claimed that the skulls possessed supernatural powers. Science has debunked these claims, but they still persist.

Either way you choose to believe – you have to admit, it still has a degree of intrigue.  In fact, it got a boost in 2008 with the release of the action-adventure sequel Indiana Jones and the Kingdom of the Crystal Skull – the 4th instalment in the action/adventure franchise, revolving around a fictional story on crystal skulls, specifically mentioning the Mitchell-Hedges skull.

Anna Mitchell-Hedges died on April 11, 2007 at the age of 100.  To her death, she never once denied the story of how she found the skull.  As for me, I’m just happy to have seen my little piece of history;  when she came to a little Franco-Ontarian elementary school in Kitchener, Ontario and showed her skull to 20 or so students.

PS: I have sent a message to Genevieve to see if she has any photos from the day Anna came to school.  If she responds and she has some, I’ll add them.