Sooooo,  I’m finally finished Season 11 and I was able to watch the episode that was shot down the street from me in September of 2017.

I’ll explain a bit the scene I was there for.  By the point that I arrived Yannick’s scene had already been shot and he was walking across the bridge (see photos below).  But, I was able to catch the end of the cook off.  George then walked away with Insp. Brackenread engaged in a conversation – it was hard for me to hear what they were saying — George then walked off and did a little heel click.

Behind the scenes the two extras that Ellie and I were speaking with made their entrance walking down the pathway to the right.  You can see them in the first photo below, to the left (behind George and Brackenread).

The photo of Ellie and the female extra is pictured in the last photo below (in the original post).

Here are some pics from the actual episode that aired: 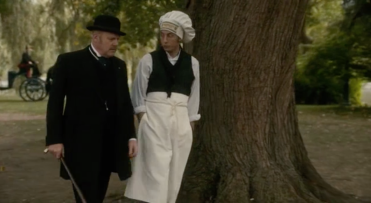 It’s UFC night here at the house, it’s also New Years Eve Eve – the boys are watching UFC and I’m blogging my second to last entry of the year.  I’m into UFC but am truly waiting for the Cyborg vs Holly Holm fight.

If you aren’t a fan or haven’t yet binged on this period detective mystery program, I suggest you do.  It’s based on novels by Maureen Jennings, “Murdoch Mysteries” & follows detective William Murdoch of the Toronto Constabulary. The storyline takes place in Toronto during the 1890s and early 1900s – which is interesting because I lived there for 6 years and can relate to the areas of which they speak and “shoot”.

On March 13, 2017, it was announced that Murdoch Mysteries, the #1 Drama in Canada, will be back for its Eleventh Season this Fall on CBC (Canada). YAY!!!

I moved back to Kitchener this past September …. I was out taking the dog for a walk – she loves walks in the park – where she can run, play with other dogs and stare at the ducks and geese. While we entered Victoria Park, our route was redirected by security to go around Victoria Park Lake, rather than taking the main bridge which functions as a gateway to Roos Island in the middle of Victoria Park Lake. Roos Island is home to the park’s bandstand.  I asked what was up – the guard told me they were shooting an episode of Murdoch Mysteries – Season 11.  Being a fan, I walked around the lake and started taking pics and then moved in closer for a peek of the film shoot. 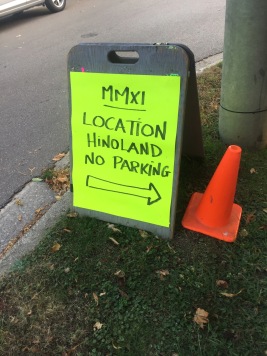 Victoria Park is the oldest park in Kitchener, Ontario and is situated downtown. Victoria Park opened in 1896, the park was built mostly on swampy farm land. The man-made lake is fed by Schneider Creek, surrounds three small islands, and is crossed by multiple bridges, one dating to the creation of the park. The park also contains the Victoria Park pavilion, the Victoria Park Gallery and Archives, a bandstand, and a historic boathouse, which is now The Boathouse, a pub and live music venue.

As we rounded the corner of the lake I encountered the barrage of filming trucks.  As we crossed the way, another security guard halted our walk as they were shooting a scene  …. I was anxious to see if I would see Yannick (Get. Murdoch), Johnny Harris (Const. Crabtree) or Thomas Craig (Insp. Brackenhead).  I did end up running into Yannick – he was crossing the bridge, I wanted to take a photo BUT he was eating and I didn’t want to disturb him 😦

As we crossed the bridge, we came across the main filming area, the bandshell – where they seemed to be shooting a scene where George was involved in a cook off of some sort. 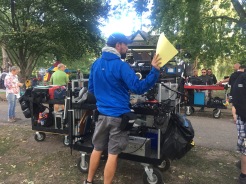 The crowd was able to stay and observe the shoot, it was so interesting to see of the hard work, crew and staff that goes into one scene!  While there for the couple of hours, Ellie made friends with staffers and extras alike 🙂  She’s just too darned cute!

Have any of you been able to watch any movies shoots?

Hello and welcome to my blog! I never really thought about starting a blog much before recently, I mean … what did I have to say or offer that would have anything of value? I’m not an expert in decorating; I just have an eye for it. I’m not “The Nanny”, but I am the mom of two lovely, beautiful, driven young women. I can speak to topics such as coming up through the lower ranks of the social financial system, being a teen mom, being an empty nester at 42, highlight some trials, tribulations and exaltations and about how I created a life for myself that I am happy with beyond measure. It wasn’t much before a friend of mine said “you should write a book” that I gave some serious consideration to blogging. My goal, really, is to provide and share some of my experiences, create dialogue and maybe help a few people out along the way. I welcome your comments, questions and ideas about what you’d like to chat about. Namaste, T xo View more posts

One thought on “On Set: Update – Murdoch Mysteries Was Shooting in my Hometown …”