It’s dreary and rainy out today, and I don’t wanna get out of bed.  Since I am taking a bit of a break from traveling, I thought I’d focus more so on the Genealogy part of my blog … I still have so many lines that I need to “EXPLORE”.

I select which one to follow next as I go through my green leaf hints on ancestry.ca.  I seem to gravitate the the photos and the stories prior to the actual statistics.  While doing so last night, I came across my step 10th great-uncle again – Louis Joliet and thought that I would spend more time writing about him.  I had touched a bit on him during my very 1st ancestry blog and, I thought I’d dedicate a whole page to him and his awesome accomplishments.

Before skipping onto how I got here – I suggest you read the original post which breaks down my family connection to Martin Prévost – because he is the connection to Louis Joliet, the French Explorer.

When Marie D’Abancourt (Louis’ mother) and her twin sister Marie were born in 1619 in Soissons, Côte-d’Or, France, their father, Adrien, was 36 and their mother, Simone, was 30. She was married three times.

Marie D’Abancourt married Jean Jolliet in Quebec City, Quebec, on October 9, 1639, when she was 20 years old.

Marie D’Abancourt married Godfroy GUILLOT in Quebec City, Quebec, on October 19, 1651, when she was 32 years old.

Marie D’Abancourt married Martin Prevost on November 8, 1665, when she was 46 years old.  This was Martin’s 2nd marriage.  HE IS MY CONNECTION TO LOUIS JOLIET.

From her marriage to Jean Jolliet, Marie had a child Louis – this my friends, is MY step 10th great-uncle – LOUIS JOLIET.

At the age of 10 Louis Joliet was sent to the Jesuit College in Québec where he was educated until he left in 1667.

He became a fur trader at the age of 23, dealing with the Native Indians.

On 4th June 1671 Simon Daumont de Saint-Lusson, a military officer from New France, claimed the lands of the great lakes area for France. The ceremony in Sault Ste. Marie was attended by many of the local Indian nations and Louis Jolliet was one of the declaration’s signatories.

In 1672, Jolliet was chosen by Intendant Jean Talon to lead an expedition to determine whether the Mississippi, known from Aboriginal accounts, flowed into the Gulf of Mexico or the Pacific Ocean.

On 17 May 1673 Louis Joliet and his party left St. Ignace in two birch bark canoes. They headed for Green Bay on Lake Michigan before traveling along the Fox River and, after a portage (carrying water craft overland), they arrived at the Wisconsin River. Louis Joliet eventually reached the Mississippi River in June 1673.

The friendly Indians in this village warned Louis Joliet and his party of the danger from hostile Indians further down the river. Taking into account this warning and the danger of running into the Spanish near the Gulf of Mexico, they decided to turn round and head back to Quebec.

Louis Joliet returned via the Illinois River and Green Bay, where, in 1674, Father Jacques Marquette decided to leave him and remain at the Saint Francis Xavier mission. While traveling through the Lachine Rapids on the Saint Lawrence River, his canoe was capsized and he lost all of his maps and journals as well as his 3 traveling companions. He was rescued by fishermen and continued on to Quebec where, after traveling 2500 miles, he arrived in 1674. 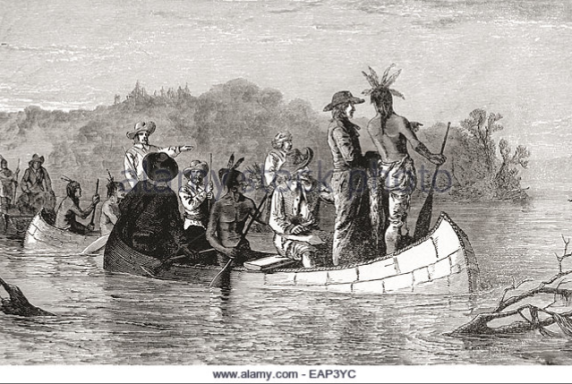 Louis Joliet reported their discoveries to the French Governor Louis de Buade Frontenac, and went on to rewrite some of his journals from memory. However, the notes written my Marquette were relied on as being the more accurate resource.

However, in 1675, working from accounts by Jolliet and Marquette, Jean-Baptiste-Louis Franquelin drew a map of the expedition that was published in Paris in 1681 under the title Voyage et découverte de quelques pays et nations de l’Amérique septentrionale.

Many statues of Marquette and Joliet have been erected all over the area, read this article to find out where in Chicago.

Upon his return to Québec City, Jolliet was denied a fur concession he sought for the Illinois area and joined his father-in-law in 1676 in a fur-trading company at Sept-Îles. Jolliet became seigneur of the Ȋles de Mingan in the Gulf of St Lawrence in March 1679, and of Île d’Anticosti in 1680.

In April 1679, at the behest of officials in Québec City, Jolliet embarked on an overland journey to Hudson Bay to survey the influence of English traders in the region, and to assess the possibility of a trade alliance with Aboriginals in the area. His reputation preceding him, Jolliet declined an offer from English Governor Charles Bayly to come and work for him, but became convinced that “if the English are left in this bay they will make themselves masters of all the trade in Canada.” Upon his return, Jolliet recommended that the French “remove the English from this bay,” or at the very least, “prevent them from establishing themselves any further, without driving them out or breaking with them.”

Jolliet then concentrated on trade and fisheries at his concessions, until two raids by the English in 1690 and 1692 dealt him a financial blow from which he never recovered. On 28 April 1694, with the backing of a Québec merchant, he set sail from Québec City aboard an armed ship with 17 men and travelled along the coast as far north as lat. 56°8´ N near present-day Zoar. In addition to fishing and trading with Aboriginals along the way, Jolliet took detailed notes of the coastline and its inhabitants and completed 16 cartographic sketches — the first recorded account of the northern Labrador coast and the most detailed description of the Inuit to that time.

In April 1697, Jolliet succeeded Jean-Baptiste-Louis Franquelin as teacher of hydrography at the Jesuit College of Quebec. He was appointed hydrographer to the king of France in 1680.

In 1679 the presence of the English in the Hudson Bay area was proving a worry to the French Colony, so Louis Joliet was sent over to assess the situation. Together with seven others he left on 7th April 1679 and traveled via Saguenay, Lake St. John, Lake Mistassini and Rupert River to James Bay. The English invited him to join them, however he declined and made his way back to Quebec. He reported that the English control over Hudson Bay was a threat to Canadian trade as the area was the richest source of furs in the country.

In 1681 he built a fort on the island and settled there. In the winter of 1690 the fort was briefly captured and occupied by the English.

Louis Joliet undertook an expedition sponsored by a merchant, François Viennay-Pachot, to explore the Labrador Coastline. He set off in the spring of 1694 sailing through the Strait of Belle Isle and Eskimo Bay to Zoar. He kept a journal and made notes and sketches of the people he met.

He was appointed professor of hydrography at Québec College on 13th April 1697.

Louis Joliet died in 1700 sometime between May and October. The exact place of his death is unclear although it is generally believed to have been at l’Île d’Anticosti.

Joliet’s main legacy is most tangible in the Midwestern United States and Quebec, mostly through geographical names, including the cities of Joliet, Illinois; Joliet, Montana; and Joliette, Quebec (founded by one of Joliet’s descendants, Barthélemy Joliet).

Check out The Story of Chicago in Maps . It’s amazing what you can see when you get a little perspective. You can slide the Time Machine slider bar to see how dramatically Chicago has changed since Marquette and Joliet first visited the area. 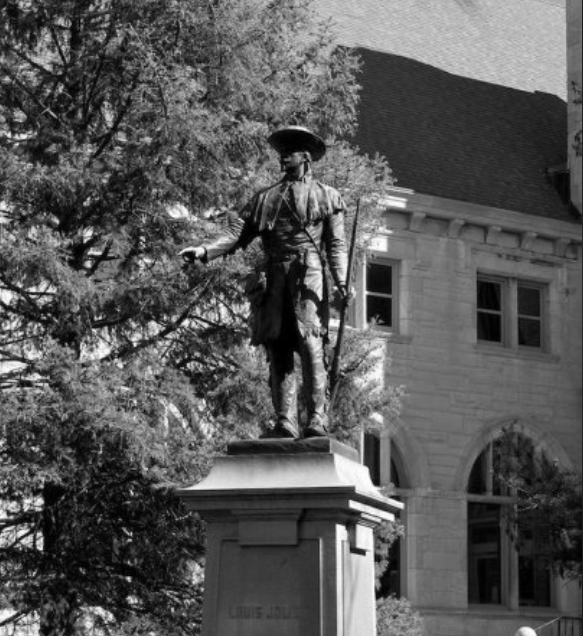 He also has a fine cognac named after him – see manufacturers notes below!

This makes me want to get into my LandRover and driving the 7 hours to Illinois to see all of my ancestors stuff in person.  Maybe sip on some of that nice cognac?  Maybe I can score a free bottle if I can prove I’m a relative 😉

@chicago peeps – is there a Joliet Street there?

What kinds of things are you learnings from your research?