My lineage just gets better and better!  To date I have discovered a relation to a King of France, a US President, one of the Filles du Roi, an explorer,  a colleague of Samuel de Champlain, a great Uncle who died in WWI in Flanders … these are just some of my finds … and NOW …. a relation to the great aviatrix Amelia Earhart!

It’s one of the greatest unsolved mysteries!  It’s been 80 years and no resolution. I have long been fascinated by the story of Amelia Earhart.  I have watched numerous documentaries about her disappearance on History, Nat Geo, CNN etc.  The story fascinated me long before I discovered our distant relation.  Amelia is my 9th cousin, 2 x removed via the Obadiah Holmes line – the same lineage that my relation to Honest Abe comes from.  So RICHARDS family, this one is also for you! 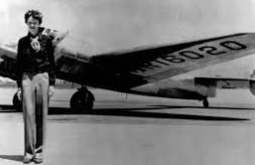 As you may well know, Amelia Earhart was an Aviation Pioneer. Her flying career began in Los Angeles in 1921 when, at age 24, she took flying lessons from Neta Snook and bought her first airplane, a Kinner Airstar. Due to family problems, she sold her airplane in 1924 and moved back East, where she took employment as a Social Worker.

Four years later, she returned to aviation bought an Avro Avian airplane and became the first woman to make a solo-return transcontinental flight. From then on, she continued to set and break her own speed and distance records, in competitive events, as well as personal stunts promoted by her husband George Palmer Putnam.

Amelia married George Palmer Putnam in Noank, Connecticut, USA, on February 7, 1931, when she was 33 years old.

A little about George:  In July 1927 he was responsible for the blockbuster publication of “We”, Charles Lindbergh‘s autobiographical account of his early life and Orteig Prize winning non-stop transatlantic solo flight from New York to Paris made in May of that year. The book proved to be one of the most successful non-fiction titles of all time selling more than 650,000 copies in less than a year and earning its author over $250,000, which is the 2017 equivalent of $3,410,056.50.

A significant event in Putnam’s personal and business life occurred in 1928, before the merger. Because of his reputation for working with Lindbergh, he was contacted by Amy Guest, a wealthy American living in London who wanted to sponsor the first-ever flight by a woman across the Atlantic Ocean.

Guest asked Putnam to find a suitable candidate and he eventually came up with the then-unknown aviatrix, Amelia Earhart.As it turned out, they shared many common interests: hiking, swimming, camping, riding, tennis and golf. When Putnam first met Earhart, he was still married to Binney. After she successfully completed her flight across the Atlantic, Putnam offered to help Earhart write a book about her flight, following the formula he had established with Charles Lindbergh in the writing of “WE”. The resulting Earhart book was 20 Hrs., 40 Min. (1928).

When they began writing, Putnam invited Earhart to live in his home because he felt like it would make the process easier. Shortly after, Binney left for South America which was followed by the divorce of George and Dorothy Putnam in 1929. Putnam had undertaken to heavily promote Earhart in a campaign that included a series of lecture tours and using pictures of her image in mass market endorsements for products including luggage, Lucky Strike cigarettes (this caused image problems for her, with McCall’s magazine retracting an offer) and other products.

Putnam and Earhart made their relationship official shortly after his divorce was finalized, but they didn’t marry until 1931.

She became a household name in 1932 when she became the first woman, and second person, to fly solo across the Atlantic, on the fifth anniversary of Charles Lindbergh’s feat, flying a Lockheed Vega from Harbor Grace, Newfoundland to Londonderry, Ireland. That year, she received the Distinguished Flying Cross from the Congress, the Cross of Knight of the Legion of Honor from the French Government, and the Gold Medal of the National Geographic Society from President Hoover.

In January 1935 she became the first person to fly solo across the Pacific Ocean from Honolulu to Oakland, California. Later that year she soloed from Los Angeles to Mexico City and back to Newark, N.J.

In July 1936 she took delivery of a Lockheed 10E “Electra,” financed by Purdue University, and started planning her round-the-world flight. Her flight would not be the first to circle the globe, but it would be the longest, 29,000 miles, following an equatorial route – the longest in history. 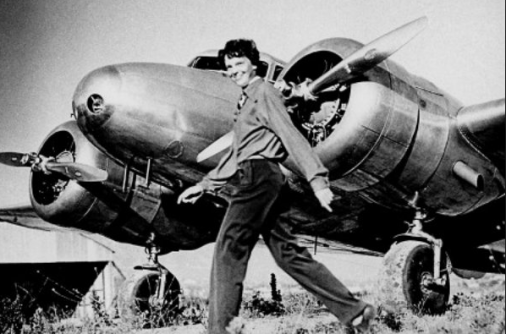 On March 17, 1937 she flew the first leg in her state of the art, twin-engine Lockheed 10 Electra from Oakland, California to Honolulu, Hawaii. As the flight resumed three days later, a tire blew on takeoff and she ground-looped the plane. Severely damaged, the aircraft had to be shipped back to California for repairs, and the flight was called off.

Her Greatest Journey – Around the World Circumnavigation

The second attempt would begin on May 20 1937 heading East; Fred Noonan, a former Pan Am pilot, would be her navigator and sole companion in flight for the entire trip. Their last known refuelling stop was in Southeast Asia, when they arrived at Lae, New Guinea on July 2 1937. About 22,000 miles of the journey had been completed. The remaining 7,000 miles would all be over the Pacific Ocean. Their intended destination was Howland Island (their next refuelling stop), a tiny piece of land a few miles long, 20 feet high, and 2,556 miles away. Their last positive position report and sighting were over the Nukumanu Islands, about 800 miles into the flight. Earhart and Noonan are never seen alive again.

The United States Coast Guard cutter Itasca was on station near Howland, assigned on short notice to communicate with her plane and guide her to the island once she arrived in the vicinity. But it soon became evident that she and Noonan had little practical knowledge of the use of radio navigation. The frequencies she was using were not well suited to direction finding (in fact, she had left behind the lower-frequency reception and transmission equipment which might have enabled Itasca to locate her), and the reception quality of her transmissions was poor. After six hours of frustrating attempts at two-way communications, contact was lost. A coordinated search by the Navy and Coast Guard was organized and no physical evidence of the flyers or their plane was ever found. Their fate has been the subject of many rumors and allegations which were never substantiated. Modern analysis indicates that after passing the Nukumanu Islands, she began to vector off course, unwittingly heading for a point about 100 miles NNW of Howland. A few hours before their estimated arrival time Noonan calculated a “sun line,” but without a successful, radio-frequency range calculation, a precise “fix” on the plane’s location could not be established.

According to the crash and sink theory, Earhart’s plane ran out of gas while she searched for Howland Island, and she crashed into the open ocean somewhere in the vicinity of the island.

Several expeditions over the past 15 years have attempted to locate the plane’s wreckage on the sea floor near Howland. High-tech sonar and deep-sea robots have failed to yield clues about the Electra’s crash site.

Theories About Their Disappearance

There are numerous conspiracy theories about Earhart’s disappearance.

1)The International Group for Historic Aircraft Recovery (TIGHAR) postulates that Earhart and Noonan veered off-course from Howland Island and landed instead some 350 miles to the Southwest on Gardner Island, now called Nikumaroro, in the Republic of Kiribati. The island was uninhabited at the time.

A week after Earhart’s disappeared, Navy planes flew over the island. They noted recent signs of habitation but found no evidence of an airplane.  TIGHAR believes that Earhart—and perhaps Noonan—may have survived for days or even weeks on the island as castaways before dying there. Since 1988, several TIGHAR expeditions to the island have turned up artifacts and anecdotal evidence in support of this hypothesis.

Some of the artifacts include a piece of Plexiglas that may have come from the Electra’s window, a woman’s shoe dating back to the 1930s, improvised tools, a woman’s cosmetics jar from the 1930s and bones that appeared to be part of a human finger.

In June 2017, a TIGHAR-led expedition arrived on Nikumaroro with four forensically trained bone-sniffing border collies to search the island for any skeletal remains of Earhart or Noonan.

3) Another theory claims that the pair served as spies for the Roosevelt administration and assumed new identities upon returning to the United States.

4) The final theory, and likely most realistic is that they ran out of fuel, having not been able to locate Howland Island and crashed into the sea.

What do you think happened?